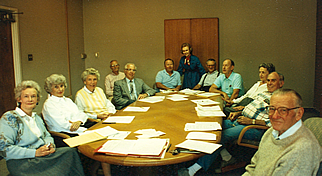 In January of 1989, members of the Pasadena City College Board of Trustees, having conferred with the President of the College, spoke with two retirees from the College, asking them to consider founding a PCC retirees group. While campaigning for re-election, one member had discovered a desire for such an organization among some other retirees living in Pasadena. During the spring of that year, these two retirees put together a committee to explore the idea and formed the Pasadena City College Retirees Association.

The first general meeting of the Association was held in June of 1989, to which all Retirees were invited. The meeting was held on campus in the Circadian and featured information about the new library to be built (the Shatford Library), musical entertainment, and an opportunity for old friends to mingle and socialize.

Subsequently the Board of Trustees granted the Retirees Association official status as an organization of the College. Since that time activities have included such events as trips to cultural places like the Huntington Library and Gardens, the Norton Simon Museum, the Getty Museum, and the Cathedral of Our Lady of the Angels; features of special interest like the Pageant of the Masters at Laguna and, at the Los Angeles County Museum of Art, the King Tut Exhibit; places of architectural interest like the Gamble House and Caltech; scientifically significant places like the Jet Propulsion Laboratory; drama offerings at Pasadena City College and other theaters; concerts at the Hollywood Bowl; two-day jaunts to look for whales off the Santa Barbara Coast and to explore Santa Catalina; geological lecture-tours along the San Andreas Fault; sites of historical interest like the Nixon Library and the Reagan Library; excursions to Palm Springs to enjoy "The Follies"; and an annual "mixer" at which colleagues have the chance to renew friendships.

One of the most appreciated features of the Association has been the Newsletter, published twice a year, filled with news of the College and other items of interest about and to the Retirees. The first issue was published and distributed in January of 1990. The PCCRA also sponsors a scholarship program for current deserving students at PCC which provides funds which may be used for textbooks, educational supplies, laboratory expenses or tuition at the option of the recipient.

Members of the Retirees Association continue to support the work of the College by volunteering to tutor, to assist at phone-athons for the College Radio Station KPCC, to work part-time in some divisions, to fund various scholarships, and to assist in other ways as needs arise. The association numbers about 550 members. While the concentration of members is in Southern California, especially in the greater Pasadena area, Retirees are scattered from New England to the Southeast, throughout the Middle West and the Southwest, along the Pacific Coast to the Pacific Northwest, and in Canada.