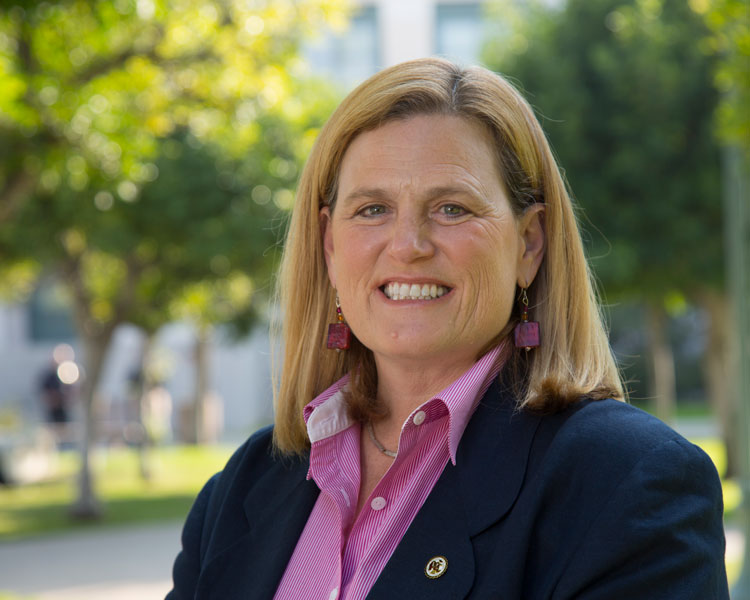 Superintendent/President Erika Endrijonas's first day was Jan. 22, and she hit the ground running. In this interview, she opens up on her vision for the college, her attraction to coming to PCC, and her thoughts on higher education in California.

Tell us about your first job in higher education.

My first full-time job in higher education was at Granite State College. It's one of four state institutions in New Hampshire, and its sole focus is helping adults go back to college. In this job I did a whole combination of things: I marketed the program to folks in the community, I evaluated transcripts, I helped with financial aid, I admitted students, I advised them, I did some career counseling, and then I graduated them. I called it “cradle to grave” advising. I did a little bit of everything. The job also gave me a lot of insight into the instructional side because I taught there while I was doing all of this, but also on the student services side of it and how it all works together.

What drew you to PCC?

A lot of things. Number one – reputation. When I told some people who didn't know I applied that I got the job, they said, “Whoa, that's an awesome gig.” That's the perception many have of PCC. It's got such a strong reputation for academics, student services, equity, and transfer – it's just up there in terms of all of the success metrics. And it has a storied tradition; just recently, the college celebrated Jackie Robinson's 100th birthday. Its former president was Jack Scott, who went on to become state senator and chancellor of the California Community Colleges System. So, PCC is kind of beacon in terms of colleges.

Another reason is that I had been for the last four and a half years the president of Los Angeles Valley College in the Los Angeles Community College District. So, this is a promotion for me. As a multi-college president, I reported to a chancellor who reported to a board. I've had a lot of interaction with board members, but in terms of that direct responsibility and managing things that happened for the district, that was really the chancellor's job.

Here at PCC, this is an opportunity for me to come and work directly with a board, but also stay connected to faculty, students, and staff of a college campus. It's the perfect marriage of the things I wanted to do.

While colleges have focused their energies on expanding access to college, how can PCC help turn the conversation to ensuring every student successfully reaches their educational goals?

I think we already have in terms of how we bring students into the college through the Pathways program and how we are approaching the Guided Pathways effort. They share a common word, but they are very different. I know we're still in the development and implementation phase of Guided Pathways, but what I've seen so far is that it has a strong component in helping students complete the program. What's great about it is that you have structure that helps students understand what's expected of them, you have a roadmap that guides them through college, and you have the coaches there to help. But what I've seen is a lot of focus on how we help students exit, because that's often where students get lost.

One of the things I'll be talking to our counselors about is how they interact with students in that in-between time. Let's say a student earns 15 units. But before they go on their way to earning 50 units, how many times do we reach out to them? Do we do what's called “intrusive counseling?” Do we do “concierge counseling?” What is our approach? I've seen all of that work and I'm certainly not here to tell counselors how to do it; I'm just curious. But my hunch is we're already doing it based on what I've seen.

What do you hope to accomplish in your first year here?

One of the things I've done in my first days here is that every morning when I have my first cup of coffee at home, I send a personal birthday message to any full-time staffer who has a birthday. It's not an automatic message and nobody sends it for me. So, it's really about making that connection. The first email I sent out to the campus was really about introducing myself. Yes, I'm the superintendent-president and there's a big perception that I have all this power, but it's not really about exercising power. It's more about how do we work together.

What will you do to engage the shared governance process here on campus?

I think the first thing is to meet with everyone. Basically, we need to start from the vantage point of respecting the process that's already in existence. And then talking about if – and that's a big if – there are any concerns about how things go, and then articulating those concerns.

Starting in March, I will have monthly office hours for staff and students. The idea behind that is to give folks an opportunity to come in and talk directly to me. The shared governance piece is very important. But shared governance is representational. There are people who represent other people, and I think everybody tries to do the best they can to represent their members. But sometimes there might be an individual perspective that doesn't make its way through that process. By having office hours, it's a way for direct feedback.

With enrollment down in community colleges across the state, how will PCC approach the state's performance-based funding model?

I think we're challenged by that new model. I think what we are is going to do is continue and even probably increase our efforts at completion as we're implementing Guided Pathways. The good news is that in the governor's budget proposal for 19-20, they are keeping the community college system at the funding level of what we received from 17-18, which means it's what we received last year. So that's good. If the new funding formula had gone into effect fully, then instead of our 19-20 budget being based on 17-18, it would've been based on an average that might have brought us down.

My biggest concern about the funding formula is the way it's set up, so that colleges can capture as much funding as possible through improved student outcomes. But you have smaller colleges that don't have size, that don't have a local industry, that don't have a local CSU campus. Those colleges may suffer. The last I heard was that there are 20 colleges in the system that could be negatively impacted by this formula based just on their size and where they are located.

You've spoken about your belief in the power of athletics at the community-college level, and you serve on the board of the California Community College Athletic Association. What drives your passion for athletics as part of the student experience?

I think it's one component of the student experience. California community colleges are rare in terms of offering athletics. There aren't as much athletics offered at community colleges across the country. When people talk about a comprehensive community college, I think that you have to have athletics. The way that the world of athletics work, especially in some of the professional sports, you have to get there through a college program. And not everybody can get right into a division 1, 2, or 3 school. The other thing is that sometimes students just want another couple of years of competition. If they played sports in high school or junior high, this is another opportunity for them to compete again.

It also creates a wonderful tradition for the college. I was at Valley College and we won two football championships and it was great morale for the college. It makes a difference. When I became president, the college was in significant debt and I was under a lot of pressure to get the college out of it. And a lot of people were saying to just get rid of athletics – that'll save a lot of money. And I was consistent in my refusal to do that. I said we have 300 athletes on this campus – 300 people who are full-time students. Why would I get rid of the students who are all taking a full-time load and who are more likely to complete in two years than any other student population we have? That didn't make any sense.

The positives that come with athletics far outweigh the negative. It's part of student life.